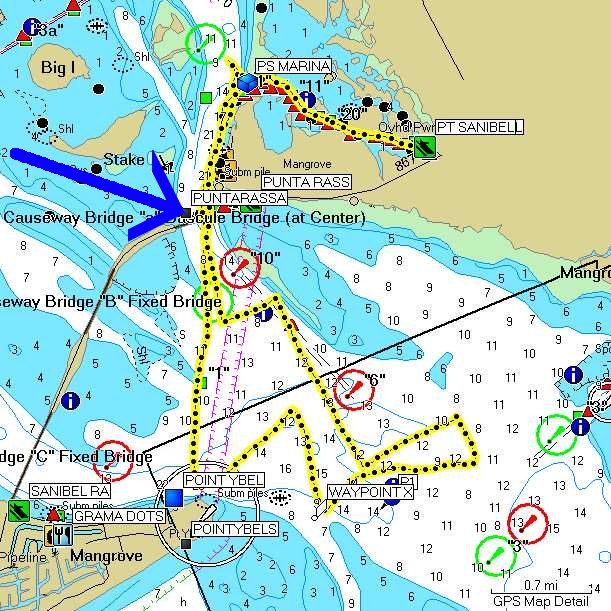 This was our sail yesterday. The big blue arrow shows the predominate wind. The tide was initially against up as we went downriver. After motoring out of Port Sanibel behind Punta Rassa, we raised our sails when we hit the main Caloosahatchee channel. We sailed almost due south on a beam reach, using the motor for a while against the tide, until we got past the bridge. We use the motor most of the time we go under the bridge, because the wind is unpredictable there and the big boats have a habit of tossing us about.

We made good time all the way down to the Point Ybel Lighthouse on the tip of Sanibel Island. At that point we gybed around to a broad reach and headed for Estero Island. We gybed twice again, beating downwind. This annoyed the hell out of me, so I convinced the skipper to let me rig the jib wing-on-wing using an improvised spinnaker pole made out of the boathook. This let us sail east, directly toward our destination, at about the same speed. This is a lot easier to rig than the spinnaker.

After a while, we decided to head back, beating upwind and making good time, once we realized that the fairleads needed adjusting (again).