Shavegeek is an actual term, not invented by me. It refers to those guys who look down on Gillette Mach3 and Schick Quattro users like Unix hackers look down on Microsoft Windows users.

The shavegeeks recommend (please note that shavegeeks, like all geeks, will argue the pros and cons of any aspect of shaving: they don't speak with 100% unanimity.) using a bristle brush and shaving soap or cream and either a straight razor or double-edge safety razor.

My shaving routine for the past few years---since I grew out the beard on my cheeks as well as chin---has been to shave my neck every morning in the shower with ivory soap and a cartridge razor. My main gripe was the expense of the cartridge---each one cost more than a dollar, and are getting more expensive with each new upgrade. So I bought a Merkur HD double-edge razor. I can find a stack of 10 DE blades at the local grocery store for about $2.75.

At the same time, I ordered a bristle brush and shaving soap. For several days I tried shaving in front of a mirror again, but I didn't like it. First of all, I am now used to feeling around my face instead of looking at it. Secondly, as hot as hot lather can be, it is never the same as standing inside a steamy shower; my skin knows the difference. Finally, cleanup is more complicated when I'm already out of the shower. I need to wash bits of soapy lather out of my beard and wash off my face.

So I'm now using the DE razor in the shower. The big difference between a modern cartridge razor and a DE is that the cartridge is on springs that allow it to keep the right angle on your face. With the DE, I need to continually be mindful of the right angle. Of course it's a safety razor, so when the angle is wrong, it simply doesn't shave.

Plus it's just a beautiful piece of equipment. Mechanically simple. Inexpensive blades. Durable. Made out of steel. Doesn't fall apart when you drop it on the floor. 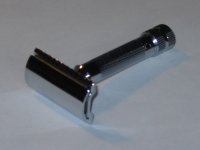 I don't desire baby-smooth skin, which most shavegeeks go for. The closer your shave is, the more irritation you will get. So I shave in either one or two passes. The first pass is with the grain and the second pass is perpendicular to the first. I usually completely forgo the final against-the-grain pass that many shavegeeks seem to love. When I am in a hurry I might even skip the second pass, too.