Many cities are designed on a Cartesian plan: north-south streets and east-west streets. Madison is on a double-Cartesian plan: N-S, E-W, NW-SE, and NE-SW streets all jumbled together.

If you want to go northeast, it is nice to be able to get there, but it does tend to make the city confusing.

So I've been thinking about other ways of doing it. instead of four and instead of eight direction, how about six? E-W, NW-SE, and NE-SW, where NW is really closer to 60 degrees, not 45 degrees.

You would end up with something that looks like a honeycomb. Then I pull in another idea: If neighborhoods are well-defined, does that make neighborhoods more cohesive? Would it help if I put definite borders between them? Why not space them a bit? Put in parkland to separate them. 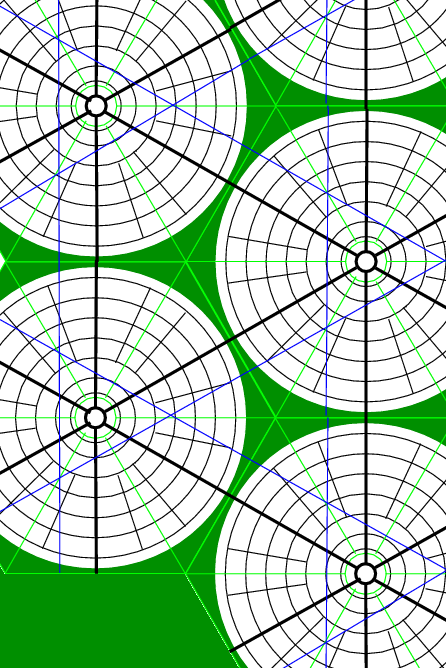 The scale is on the order of one to two miles. This does not take into acount the unique topography of every location. The plan would need to be adapted.

Has anyone ever built a city with mass transit designed in from the beginning? Is it always an afterthought?

The thing I love the most about this plan is that one could walk from one end of the city to the other and never leave parkland.