The media looks for heirarchy. That's why they spend so much time talking about the people on top (celebrities, politicos, etc.) and treat human intrest stories as if they were not the real news of the day. For example, every Easter, they have to mention "what the Christians are up to." Instead of any seroius discussion about what Christianity is all about, they simply mention what the pope is up to. As if (1) the protestant reformation never took place and (2) even Roman Catholics are incapable of doing anything religous without invoking the name of the pope. 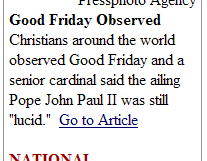 They are way too interested in what is goin on at the top, and ignore the fact that religious celebrations are really very local or even individual things.